Couldn't catch any fish and I had this squid bait that was stinking up the cooler. Was about to burn them on the nightly fire when this fellow trailer'n goober happened by
"You ain't gonna burn them squid I hope. I't stink up the whole trailer park...make folks wanna leave."
"Really?"
"Yeah...I done it once and me and the old lady had to go out for supper, then sleep in our doublewide with the windows shut. 'Course our trailer's in a low spot & stink lingers...sometimes for days. Burnt a tire once...."
"Thanks for the tip."
"Listen...you ain't got another beer do you? Old lady won't let drink around the grandchildren & there's three of 'em and its driving me bat shiit."
"Sure. But it ain't beer. It's Miller Lite. Trying to take care of my pancreas."
"How does Miller Lite help?"
"Less sugar. Figure I'll live 15-20 minutes longer."
"Maybe you'll be having a lap dancer during them extra minutes." "I'm gonna burn these squid & see what happens."
I lit the fire and the squid began paying off....the smoke drifting around a 45 foot motor home next door.
"Woooweeee! I told you, didn't I?" The goober says.
"Give me another one of them Miller's will you?"
"Sure, but you gotta linger a bit to help me celebrate the stink."
"I'll be in the doghouse, but it's better than them screaming younguns. Look...here comes the fellow from that big RV & he looks pissed."
"What ta hell you burning, mister?"
"Squid. I'm seventy years old today & in my culture burning squid on your birthday brings good luck."
"Where you from, for Christ's sake?"
" Newfoundland. I'm 1/2 Eskimo."
"J-e-s-u-s! And I drove that gas hog all the way from Akron for this?"
The goober then says, "Hey, you want a Miller Lite? It's good for your pan-crass...Makes you live longer, too." "I'm gonna go get my glass of whiskey. At least you guys are upwind." 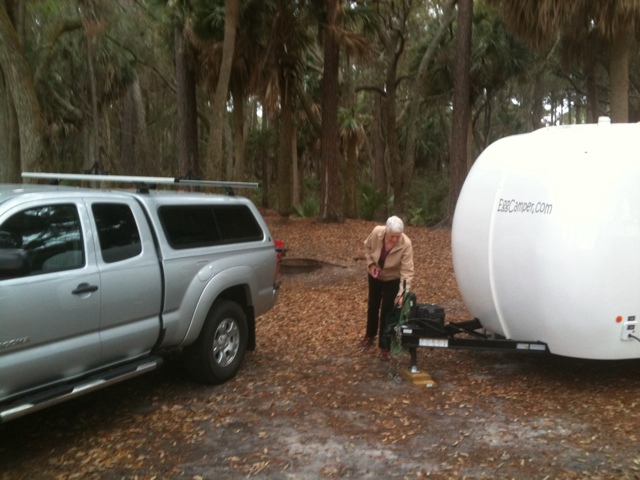 These are some shots of the area. We ran into an 80 yr. old guy with a vote for Obama plastered all over his rig. A kindred spirit. 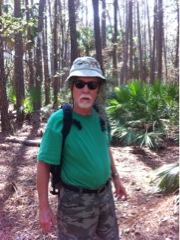 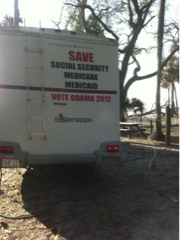 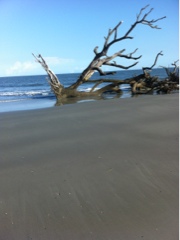 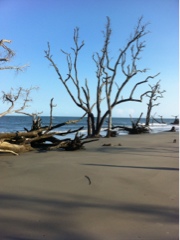 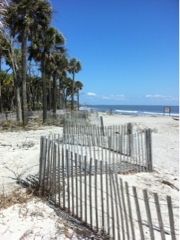 Sorry for the political diatribe. This stuff is simply too rich to pass over.

Gonna have my favorite dinner for my birthday: Weeners, pork 'n beans, slaw and light beer. With 1/2 a pancreas I'm forced to cut back on the sugar. Figure it'll extend my life span maybe 15 or 20 mins.

I ain't making this up. At the Hunting Island Light House, I put down my Elvis sandwich so I could go to the johnny & upon return there were three delighted crows on a limb overhead and no sandwich. And to think, they had no idea that mayo, peanut butter & banana had such historic, rock 'n roll significance. I threw a pinecone and yelled up at the crows, "You think you're special, but you ain't! Elvis grilled his in butter!
Hunting Island Park is a very groovy spot, though the ocean is rapidly encroaching...1,500 ft. in the past 10 years according to a volunteer at the lighthouse. Some of the older timers who've been camping here for years pointed out where there were once dunes & as some of the photos will attest, they're gone. Shore-line trees are dying on a wholesale basis. Oh well...once again the old truism rings loud and clear: Nature Always Has The Last Word. I'm reminded of something Carl Sagan once said: (paraphrased) "If all humans were instantaneously removed from planet Earth, it would revert/heal itself in fifty years...would be its old pristine self." This seems a bit of a stretch, Carl. You're telling me the golden arches, Sam's Club, Trump Towers, et al, would vaporize..be replaced by kudzu?
I'm having my 70th Birthday March 16 and here's hoping I turn into kudzu while the Visa bill is cranked up and overdue. That'll show 'em.

Tropical island and we're right on the beach, a raccoon strolled right past us last night as we ate supper . Slept with the sound of surf . Wonderful spot. 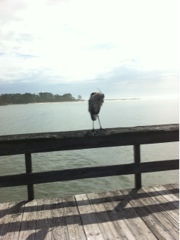 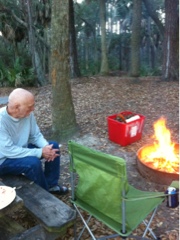 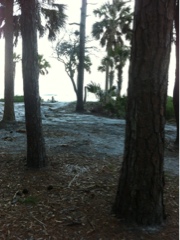 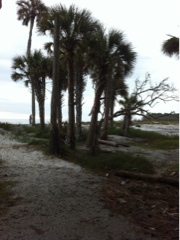