"I ain't making no plans and I'm stickin to-em," is a saying often heard among sailors. On terra firma one can say "I'll meet you at Starbucks at 10:30 AM tomorrow." At sea in a sailboat there are too many variables, eg., wind direction, wind intensity,  reliability of equipment, etc., to make definitive planning, so an experienced sailor often says things like "I'll be there within the next day or so." At sea you might as well "give it up," because the Elements aka Neptune, always whips up on sailors so they'll relinquish their need to control.

A CASE IN POINT:

Day One: We shoved off from New Bern, N.C. in our 32'  1970 C&C Corvette, a sailing sloop, for day one's 25 mile trek to Adam's Creek---part of the ICW's passageway to Beaufort Harbor, the ocean and beyond.  We should have tucked in a reef (lessened the amt. of sail) before shoving off because it's tough to do underway if the wind pipes up and the water's rough. Neptune was lurking. Though not predicted, the wind indeed piped up to 20-25 mph on the nose, finding us with our tiny diesel running and only the head sail flying. Rather than tuck in a reef in these conditions, we  hobby-horsed back and forth with sloppy tacks, slowly working our way down the mile wide tricky body of water known as the Neuse River. Had I tucked in a reef  I could have flown the main and head sail, put the centerboard down as needed, and scooted down-river, saving an hour or so.  Alas...

Day Two: A rather uneventful motor and motor-sail +- 25 miles to Beaufort Docks. Had a mini-snit with their "dock dude's," who expected to be tossed the bow line and stern line, not the stern line and mid-ship line, as is our custom. We prefer that the dock worker tug our mid-ship line so our boat moves horizontally until she's side-to against her bumpers and the  pier,  then secure the bow line. Otherwise, the worker with the bow line frequently tugs too hard, banging the bow against the forward end of the slip.

Day Three:  Hung out in beautiful Beaufort, a favorite spot of ours. We rubbernecked folks, their boats, and some historic houses. We looked at some overpriced retail stuff and ate mediocre seafood. Back aboard, we drank red, red wine, listened to some "kicking" on-board music and grooved on being sailors once again.

Day Four: Time to depart for the 7 mile ocean trek alongside Shackleford Banks to Cape Lookout aka "The Hook", a huge bay with an historic, functioning lighthouse---all  separated from the ocean by a mere spit of sand. For centuries, pirates, vessels disabled during wartime and thankful souls elated to be out of the tempestuous Graveyard of the Atlantic during a storm, have retreated behind the Hook. It's a magic spot for swimming and fishing---at night, for viewing the brilliant vault of heaven with its trillions of stars and planets. Standing out on the deck during a clear black night and looking up at this stuff gives me the funny feeling you get  swinging on a rope with your eyes closed.
The sail out to the Hook was spectacular! Ann and I kept looking at each other and smiling.  . We angled out to sea about two miles until we were  abreast of Cape Lookout and came to port for a long gentle reach pointing us precisely into the Hook's channel. What a rush.
If The Hook's good weather is a ten, it's horrible weather is an eleven. All was well day four PM.  Mostly a 10-15 mph warm breeze. Then, with no forewarning  and no weather forecast alert, like the snap of your fingers, the wind began howling 20-35 mph. A flat, solid cloud roared in and sat over The Hook like a black pancake. Pale, yellowish light from evening dusk extended from the edges of the "pancake" to the horizon. The blow ramped up. A forty-footer began dragging anchor---her stern pointed our way. It would have reeked havoc on our smaller boat, had we come together.  I fired up our lights. And hollered, "there are 100,000 acres of  good water out here to set your anchor. Please move away," to which the skipper's wife, who was on the helm, hollered to the skipper, "Honey there's a boat just behind us," and she powered away, full throttle. Thank you Neptune!
On and on it blew for two days. We pitched about like a rubber ducky in a baby's bath.  Finally, the wind switched to the  north-east, allowing us to weigh anchor and move over close to land and out of the huge fetch (wind-blown chop). Things settled down a good bit. During bad weather when at anchor, you read, you talk and laugh, you eat, you scratch about doing odds and ends to the boat. You don't sleep, much. You're always partly "on duty."  But though sleep-deprived, you seem to stay energized. When I crewed on a  stormy 14-day cruise from Wilmington, NC to St. Maarten, we were all sleep-deprived for fourteen days but never faltered. Arriving in port with about a case of Bud and a few loaves of Harris-Teeter whole wheat bread, I think it was this skipper who waxed,  "At sea I don't need much sleep or food.  It's like I'm high on Expresso and weed." (Which indeed he was.)

Day Five: We managed to inflate the dinky and motor to shore for a stroll the beach. There was a 10-lap swim around the boat and an extended float on my back during which I discovered that my new Teva sandles have great flotation characteristics. Flopping over on my back, I inhaled a bit, my Tevas popped right up to the surface, and I floated like a cork. Over-head,  purple ragged clouds roaring before the sun..

Day Six:  Time to begin the trek back to home port. Having a 1983 "rode hard and put away wet" two cylinder Yanmar diesel with 13 horsepower, we are always  forced to (a) sail, if possible, and (b) be very, very cognizant of in-coming and out-going tides---Beaufort Inlet being a prime example. Going against the tide is mostly futile. A few years back we broke a shroud (one of six cables holding up the mast) out in the ocean off Beaufort.  The wind was piping up. Afraid I'd lose the mast, I headed into the inlet against the rushing tide. We made it. How, I'm still not sure.
We got the tide just right, the wind had tapered off, and the sail back through Beaufort Inlet, the freighter turning basin, under the big Beaufort Bridge and across Core Sound to the foot of  Adam's Creek went without a hitch. By late afternoon we were again anchored at Cedar Creek, where we'd spent night one.

Day Seven:  There was +- 10 mph wind was on the nose as we headed back up-river to New Bern.  Ann suggested that we rig up the old '70's Autohelm. It  steered like a champ and we "chilled," while motoring.back to home port.
Our GPS clocked 95.7 miles during this trip to the Hook.  Apart from tide strategy, we planned very little and we stuck to it. What good would it have done? Neptune always has the last word. 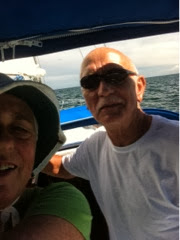 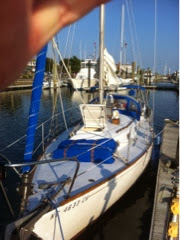 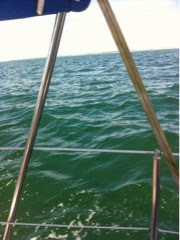 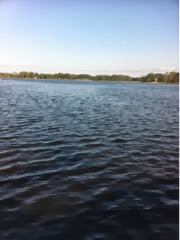 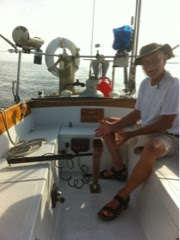 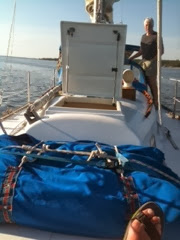 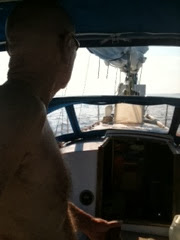 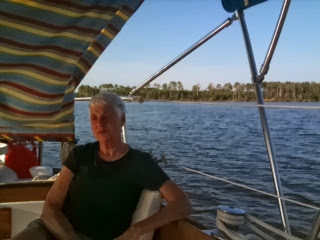 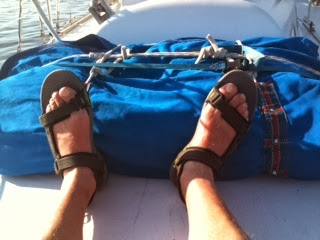 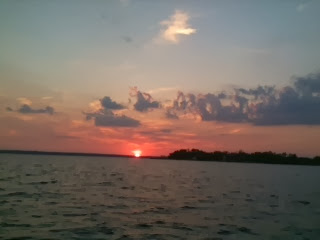